MODEL: Determine whether it is appropriate to model the moving object as a particle. Make simplifying assumptions when interpreting the problem statement.

A car is traveling with constant velocity along a highway. The driver notices he is late for work, so he stomps down on the gas pedal and the car begins to speed up. The car has just achieved double its initial velocity when the driver spots a police officer behind him and applies the brakes. The car then slows down, coming to rest at a stoplight ahead. Draw a complete motion diagram for this situation.

Enter all the correct answers in alphabetical order without commas. For example, if statements C and D are correct, enter CD. 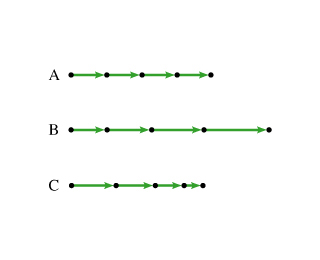 Which of the diagrams shown below most accurately depicts the average acceleration vectors of the car during the events described in the problem introduction?

In addition to the assumptions listed above, in the rest of this problem assume that the car is moving in a straight line to the right.

You can now draw a complete motion diagram for the situation described in this problem. Your diagram should look like this: