Learning Goal: To understand how to graph position, velocity, and acceleration of an object starting with a table of positions vs. time.

The table shows the x coordinate of a moving object. The position is tabulated at 1-s intervals. The x coordinate is indicated below each time. You should make the simplification that the acceleration of the object is bounded and contains no spikes.

PART A. Which of the graph below best represents the function

, describing the object’s position vs. time? 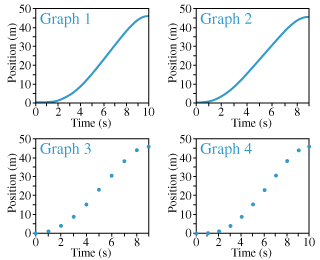 A bounded and nonspiky acceleration results in a smooth graph of x vs. t.

PART B. Which of the following graphs below best represents the function v(t), describing the object’s velocity as a function of time? 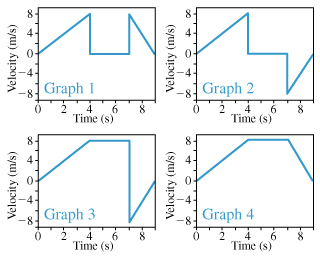 The velocity toward the end of motion is positive and decreasing. This narrows the options down to either graph 1 or 4.

The problem states that “the acceleration of the object is bounded and contains no spikes.” This means that the velocity has no discontinuities.

PART C. Which of the following graphs in the figure below best represents the function a(t), describing the acceleration of this object? 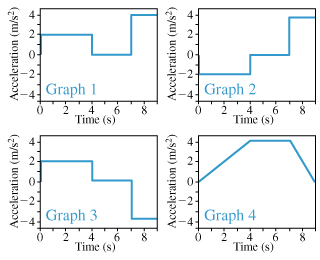 The acceleration over the interval during which the object travels at constant speed is 0 m/s².