The figure shows the trajectory (i.e., the path) of a ball undergoing projectile motion over level ground. The time

. Its launch velocity, also called the initial velocity, is

Two other points along the trajectory are indicated in the figure.

Projectile motion is symmetric about the peak, provided the object lands at the same vertical height from which it was launched, as is the case here. Hence 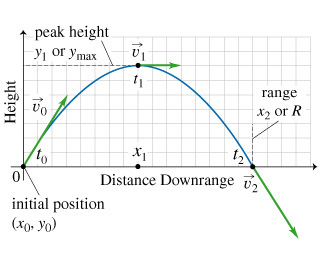 How do the speeds

Here v0 equals v2 by symmetry and both exceed v1. This is because v0 and v2 include vertical speed as well as the constant horizontal speed.