You are attempting to row across a stream in your rowboat. Your paddling speed relative to still water is 3.0 m/s (i.e., if you were to paddle in water without a current, you would move with a speed of 3.0 m/s ). You head off by rowing directly north, across the stream. Assume that the stream flows east at 4.0 m/s, determine how far downstream of your starting point you will finally reach the opposite shore if the stream is 6.0 meters wide. 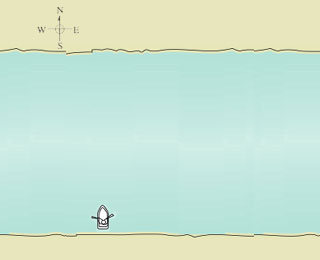 Notice that your velocity has been given in component form: 3.0 m/s across the stream and 4.0 m/s along the stream. Based on these velocity components, it would take you 2.0 seconds to cross the 6.0 meter wide stream.

In two seconds, you would have traveled