(a) What is his average velocity for the first 4 s?

(b) What is his instantaneous velocity at t=5 s?

(c) What is his average acceleration between 0 and 4 s?

(d) What is his time for the race?

To find for the average velocity over the straight line graph of the velocity vs time shown, we just need to locate the midpoint of the line. In this case, the average speed for the first 4 seconds is

Looking at the graph, the velocity at exactly 5 seconds is 12 m/s.

If we are given the velocity-time graph, we can solve for the acceleration by solving for the slope of the line.

Consider the line from time zero to time, t=4 seconds. The slope, or acceleration, is

For the first 4 seconds, the distance traveled is equal to the area under the curve.

So, the sprinter traveled a total of 24 meters in the first 4 seconds. He still needs to travel a distance of 76 meters to cover the total racing distance. At the constant rate of 12 m/s, he can run the remaining distance by

Therefore, the total time of the sprint is

The Starship Enterprise returns from warp drive to ordinary space with a forward speed of 51 km/s. To the crew’s great surprise, a Klingon ship is 150 km directly ahead, traveling in the same direction at a mere 21 km/s. Without evasive action, the Enterprise will overtake and collide with the Klingons in just about 5.0 s. The Enterprise’s computers react instantly to brake the ship.

PART A. What magnitude acceleration does the Enterprise need to just barely avoid a collision with the Klingon ship? Assume the acceleration is constant.

Equate their positions as well

Therefore, the magnitude of the acceleration should be

A particle’s velocity is described by the function

is in m/s, t is in s, and k is a constant. The particle’s position at

, the particle is at

PART A. Determine the units of k in terms of m and s.

PART B. Determine the value of the constant k.

Solve for C using the pairs

The position function therefore is

Solve for k using the pair

A toy train is pushed forward and released at

with a speed of 2.0 m/s. It rolls at a steady speed for 2.0 s, then one wheel begins to stick. The train comes to a stop 6.0 m from the point at which it was released.

The toy train has a constant speed of

.  Then, it began to decelerate at

, and finally stop at

. Considering the moment after the toy train’s wheel begin to stick up to the moment when it stopped.

To understand the meaning of the variables that appear in the equations for one-dimensional kinematics with constant acceleration.

Motion with a constant, nonzero acceleration is not uncommon in the world around us. Falling (or thrown) objects and cars starting and stopping approximate this type of motion. It is also the type of motion most frequently involved in introductory kinematics problems.

The kinematic equations for such motion can be written as

where the symbols are defined as follows:

In answering the following questions, assume that the acceleration is constant and nonzero: a≠0.

PART A. The quantity represented by x is a function of time (i.e., is not constant).

PART B. The quantity represented by

represents an initial value, not a variable. It refers to the position of an object at some initial moment.

PART C. The quantity represented by

PART D. The quantity represented by v is a function of time (i.e., is not constant).

The velocity v always varies with time when the linear acceleration is nonzero.

PART E. Which of the given equations is not an explicit function of t and is therefore useful when you don’t know or don’t need the time?

PART F. A particle moves with constant acceleration a. The expression vi+at represents the particle’s velocity at what instant in time?

ANSWER: when the time t has passed since the particle’s velocity was

More generally, the equations of motion can be written as

Here Δt is the time that has elapsed since the beginning of the particle’s motion, that is,

is the current time and

is the time at which we start measuring the particle’s motion. The terms

are, respectively, the position and velocity at

. As you can now see, the equations given at the beginning of this problem correspond to the case

, which is a convenient choice if there is only one particle of interest.

PART G. To illustrate the use of these more general equations, consider the motion of two particles, A and B. The position of particle A depends on time as

. That is, particle A starts moving at time

, particle B has twice the acceleration, half the velocity, and the same position that particle A had at time t=0.

What is the equation describing the position of particle B?

The general equation for the distance traveled by particle B is

is a good choice for B. From the information given, deduce the correct values of the constants that go into the equation for

given here, in terms of A’s constants of motion.

Particle A’s velocity as a function of time is

, and particle B’s velocity as a function of time is

Once you have expressions for the velocities of A and B as functions of time, set them equal and find the time t at which this happens.

Here is a plot of velocity versus time for a particle that travels along a straight line with varying velocity. Refer to this plot to answer the following questions. 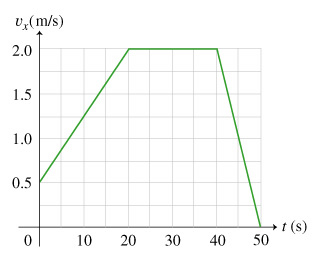 PART A. What is the initial velocity of the particle,

The initial velocity is the velocity at t=0s. Recall that in a graph of velocity versus time, time is plotted on the horizontal axis and velocity on the vertical axis.

PART B. What is the total distance Δx traveled by the particle?

PART C. What is the average acceleration

of the particle over the first 20.0 seconds?

The average acceleration of a particle between two instants of time is the slope of the line connecting the two corresponding points in a v vs. t graph.

PART D. What is the instantaneous acceleration

of the particle at

The instantaneous acceleration of a particle at any point on a v vs. t graph is the slope of the line tangent to the curve at that point. Since in the last 10 seconds of motion, between t=40.0s and t=50.0s, the curve is a straight line, the tangent line is the curve itself. Physically, this means that the instantaneous acceleration of the particle is constant over that time interval. This is true for any motion where velocity increases linearly with time.

PART E. Which of the graphs shown below is the correct acceleration vs. time plot for the motion described in the previous parts? 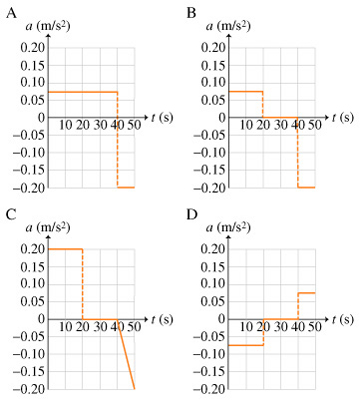 In conclusion, graphs of velocity as a function of time are a useful representation of straight-line motion. If read correctly, they can provide you with all the information you need to study the motion.

As you look out of your dorm window, a flower pot suddenly falls past. The pot is visible for a time

, and the vertical length of your window is

. Take down to be the positive direction, so that downward velocities are positive and the acceleration due to gravity is the positive quantity

Assume that the flower pot was dropped by someone on the floor above you (rather than thrown downward).

PART A. From what height

above the bottom of your window was the flower pot dropped?

PART B. If the bottom of your window is a height

above the ground, what is the velocity

of the pot as it hits the ground? You may introduce the new variable

, the speed at the bottom of the window, defined by

The initial velocity of the pot is zero. Find the velocity

of the pot at the bottom of the window. Then using the kinematic equation that relates initial and final velocities, acceleration, and distance traveled, you can solve for the distance

As the pot falls past your window, there will be some instant when the pot’s velocity equals the average velocity

Considering the motion at the middle and at the bottom of the window.

To demonstrate the tremendous acceleration of a top fuel drag racer, you attempt to run your car into the back of a dragster that is “burning out” at the red light before the start of a race. (Burning out means spinning the tires at high speed to heat the tread and make the rubber sticky.)

You drive at a constant speed of

toward the stopped dragster, not slowing down in the face of the imminent collision. The dragster driver sees you coming but waits until the last instant to put down the hammer, accelerating from the starting line at constant acceleration,

. Let the time at which the dragster starts to accelerate be

PART A. What is

, the longest time after the dragster begins to accelerate that you can possibly run into the back of the dragster if you continue at your initial velocity?

PART B. Assuming that the dragster has started at the last instant possible (so your front bumper almost hits the rear of the dragster at

), find your distance from the dragster when he started. If you calculate positions on the way to this solution, choose coordinates so that the position of the drag car is 0 at t=0. Remember that you are solving for a distance (which is a magnitude, and can never be negative), not a position (which can be negative).

in seconds and meters for the (reasonable) values

The blue curve shows how the car, initially at

Tim and Rick both can run at speed

and walk at speed

PART A. How long does it take Rick to cover the distance D?

Find the time that it takes Rick to walk the first half of the distance, that is, to travel a distance D/2 at speed

Now just add the two times up and you’re done.

PART C. How long does it take Tim to cover the distance?

half the time and runs at speed

for the other half.

The time is just the distance divided by the average speed.

PART E. In terms of given quantities, by what amount of time, Δt, does Tim beat Rick?

This is just simple subtraction between the two computed times.

PART F. In the special case that vr=vw, what would be Tim’s margin of victory Δt(vr=vw)?

If vr=vw, is the any difference between what Tim and Rick do?

PART A. What is Julie’s average speed on the way to Grandmother’s house?

and for the next 50 miles, she drove for

Therefore, her average speed was

PART B. What is her average speed on the return trip?